Getting involved in Tracking and/or Obedience Trial can be very rewarding and fun for you and your dog. If you would like to get involved but don’t know how, talk to your instructors.

Click here to read about what you can do with your GSD, and what these titles mean

Congrats to Dawn Howard and Venice who passed their Test 8 Track and Search Dog test on Friday night (Oct 2017)  at the GSDCV Trial to achieve their Track & Search Dog Champion title. 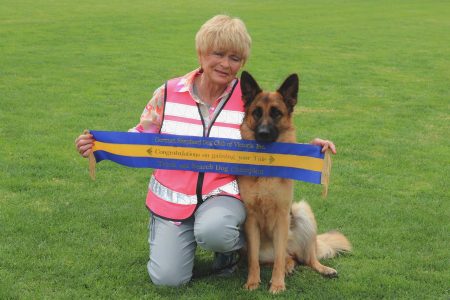 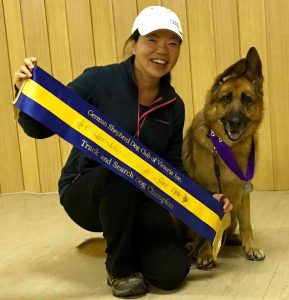 Congrats to our Grade 3 Instructor Lin Milne & Echo on passing Track & Search Dog Test 7 at the Tracking Club of Victoria trial in Cranbourne on Saturday.

Test 7 involves finding a “missing person” that has walked 1000m through various streets and paths, 4 hours ago, in an urban setting and includes a pause of 2 mins along the track. Quite a feat. Congrats to our Malvern instructors who achieved titles in Tracking, Track & Search and Rally Obedience in the past year. Alexa McGuaran and Bear (Ch Followtrek USS Enterprise PT HGH) have trtavelled all the way to germany, and Bear has now acheived a superb results in herding (the german style of tending) with a superb result of an  VORZUGLICH (EXCELLENT) grading with a score of 91 points. (Aug 2017) 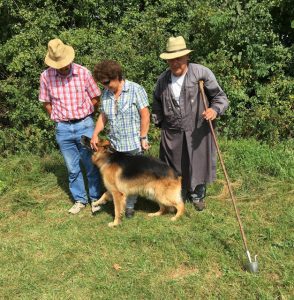 The Judge Herr Manfred Voigt, the star Bear with Alexa and the MeisterSchafer Herr Georg Krieg 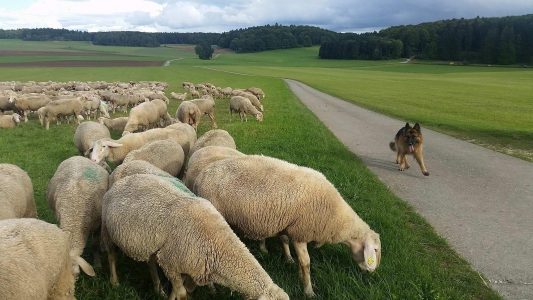 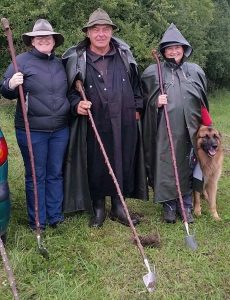 Herding in all weather !

Big congrats to Gayle Johnston and April who WON their junior bitch class today at the GSDCV champ show. 1st of 6 woohoo !  (August 2016) Congratulations to Dearne and Polly, who today achieved a pass and their Rally Advanced title at the GSDCV Rally trial at KCC Park. Woohoo ! (July 2016) 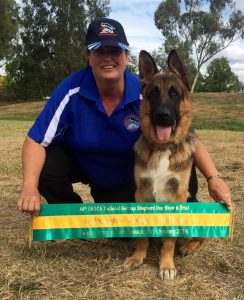 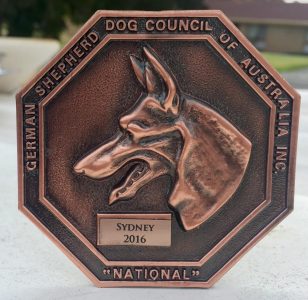 Malvern members competed in the Hunter Valley over a long weekend 18-20 May 2012.

After a long road trip Malvern achieved many successes and all had a great time. Gayle Johnston & Grubby achieved a pass in Novice at their first attempt. Both Dearne Jackson & Polly and Gayle Johnston & Daisy were awarded an Excellent in Open Bitch. Other members competed in various levels of obedience and all did well but not enough for a pass. All did Malvern proud. 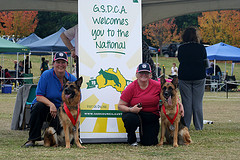 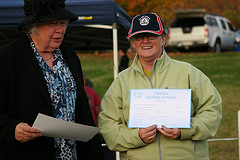 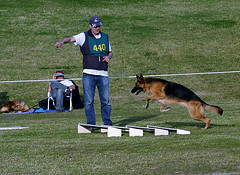 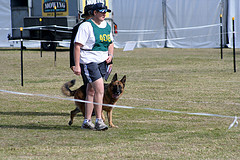 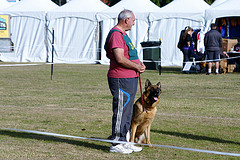 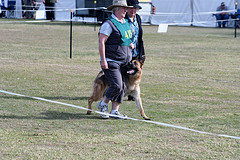 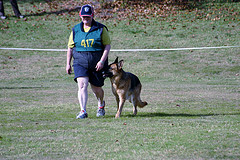 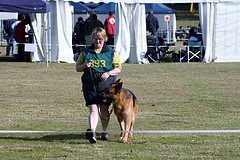 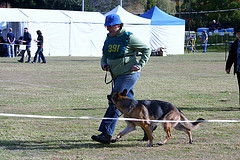 Malvern members competed at the GSDCV State Breed Show & Obedience Trial on 5 May 2012.

Malvern members competed at the Croydon Obedience Trial on 29 April 2012.

Congratulations to Lin Milne & Echo for a pass in Track 1 at their first attempt. During the track Echo even said hello to some cows but decided working was more fun.

RESULTS – GSDCV OPEN MEDALLION ‘BACK TO BACK’ OBEDIENCE TRIAL

Congratulations to Jos & Ella for achieving a 3rd Pass and Tracking Dog (TD) Title in a Tracking Trial on Sun 11 Sep.

Congratulations to Jacinta & Dizzy for achieving a 3rd pass, winning the class and gaining CCD Title on Sat 3 Sep 2011.

Congratulations to 3 Malvern members who passed the 20km Endurance Trial on Sat 25 June 2011.

Margot Souch & Cully
Margy McCluskey & Mishka
Sharyn Thompson & Schaefer
Margot and Sharyn rode bikes for the 20kms, whilst Margy ran for some 11km, helped by Clem running for 3km and then Margy swapped to a bike for the rest. A huge effort by all handlers and dogs.

Congratulations to Gayle & Grubby and Jacinta & Dizzy, each finishing 1st in the CCD Obedience ring on Sat and Sun respectively. Also, Lin & Echo competed in their first Obedience trial, and whilst more work to do, they worked well and had fun. Detailed results below.

Malvern members competed in Restricted to Group 5 Tracking Trial on Sat 14 May.

The 2011 National is over and all Malvern members and dogs returned safely, and many with some great results. Group photo of all Malvern dogs that competed in Conformation or Obedience at the 39th National. Anca and Mia, felciity and Khan and Tony and Kai completed the Endurance Trial.

After months of preparation, David & Cassie and Grant & Abbi successfully completed the 20km Endurance Trial. Both dogs can now add their new ET title to their names. Well done!

Darryl & Jess won the Open ring. This is their 3rd pass in Open hence Jess now has her Open title. Congratulations! Next stop UD!

Darryl & Jess came second in the Open with a score of 188, second highest of the day. Well done! One more trial to go and Jess will get her Open title. No pressure Darryl!

Jenny & Rex got their CD title in Nov 08. Congratulations!

At the Working Dog Show and Obedience Trial held on Nov 1 and 2 at Lancefield, both Gayle & K’Cee and Rosalie & Ithor got Excellent Medallions in the show. Yay!

Joss & Ella got a pass and came second in the ring at the Obedience Trial held at KCC Park on Oct 4. This is Joss & Ella’s second pass in CCD.  One more to go! Well done!

At the Melbourne Royal Show Dearne & Barney got their CDX title! Grubby got second place in the Open Bitch Class and K’Cee came fourth in the Open Dog Class.

What a smashing team!

Darryl & Jess took out the highest scores back to back (194 & 197 out of the possible 200) at Geelong. A few weeks later Darryl & Jess got their Novice at Moorabbin ODC’s Trial with another 190+ score and then went to the Royal Show, at only their fourth trial to win the Novice Bitch class with 191 points.

To have achieved their title in three straight trials all with “Excellent” grade scores is a remarkable achievement. The fairy tale finished with the opportunity to be in the runoff for Best in Trial at the Royal Show. While Darryl & Jess did not win on the day, Malvern is very proud of the fact that they were there in the run-off for Best in Trial.

…and here is our new Tracking Champion

Early on the morning of Sat June 28 2008 Ken Mackay & Glenraco Sargeant Barko (Barky) set out from Ballarat to Hickinbotham Winery, Dromana to find the elusive “Tracking Champion” title.
The Working Dog Club was running this trial.
The tracking champion has a “blind start”. This means that Ken & Barky were given the first clue (otherwise known as an article) and then given the command “your start is somewhere between those poles”. It was tricky but Ken & Barky were confident all the way. And indeed when they found that sneaky tracklayer there were cheers, hugs and pats.

Congratulations to Joss & Ella on achieving the Endurance Trial Title

In order to avoid having the title of “pooey” again, Joss decided to enter Ella for the 20K Endurance Trial held at Cherry Lake, Altona on 21 Jun 2008. A series of fitness preparation is required to build up Ella’s endurance before the trial. These included swimming, learning to run beside the bike, familiarising with different road conditions. After months of hard work and committment, Jos & Ella passed and achieved her ET title.

Wow! Rosalie & Ithor gained an Excellent Medallion and second place in the ring at the GSDCV 81st Championship Show and Restricted Obedience Trial held at KCC Park on 10-11 May 2008. As this was his third pass in Novice, he now qualifies for the title CD. In the Open Dog Show the following day, he was placed seventh in the Show Ring and was awarded an Excellent Medallion. Of the three dogs that gained a qualifying score in the Obedience and also presented in the Show Ring, Ithor gained the highest placing and was therefore awarded the “Walter Reimann Memorial Trophy” and a sash for Best Dual Performance in Show and Trial! This is the second time Ithor has won the Best Dual Performance at a GSDCV Championship Show. Congratulations!

The dogs who competed are L to R: K’Cee, Grian, Barney, Ella, Ithor, Ditt (Mascot) and Barky. Gayle is course the handler, breeder of all GSDs shown except for Ditt and when Ken gets his way…the groomer of all! Grian went in Open Bitch and was awarded a Very Good. K’Cee and Ithor both obtained Excellent gradings in the Open Dog class.

Read all about their trip here…we heard that it was a hoot!